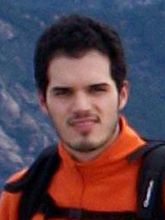 Sergio got his MSc. Degree in Telecommunication Engineering in July 2013. His research interests focused on the design and manufacturing of high frequency (microwave band) array antennas and waveguide coupling structures. He also collaborated on the start up of the anechoic chamber after its construction in 2012.

He won the "HISPASAT Award for Best Master Thesis in New Technologies for Communications Satellites" granted by the Official Association of Telecommunication Engineers of Spain. He also was the runner-up for "Young Scientist Award URSI 2014" in the XXIX URSI (International Union of Radio Science) National Symposium 2014 held in Valencia (Spain).